We have had our children two by two.  This means that Imogen and Reuben had lots of trips out on their own on the seat on the back of my bike but Jemima and Rosanna have had not quite so many trips with their next elder sibling in the bike trailer that keeps me even fitter!  Rosanna is worst off.  Since we moved house we are further from the Trains Pennine Trail, Country Park and Reservoir so a bike ride is more of a undertaking rather than an everyday event.  Now there is a really big hill climb to get home. 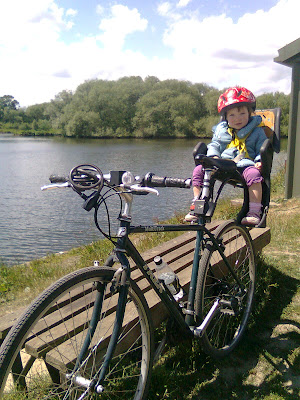 Anyway, the other day when Beccy was taking the other 3 on a home education visit I took the day off and treated  myself and my littlest girl to some favourite things. 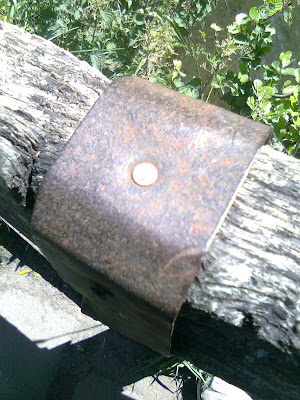 Starting about 11 years ago, Imogen and I would always stop the bike on this bridge.  After looking for fish and seeing how much the Himalayan Balsam had grown, we compared the feeling of the "smooth metal' and the "rough wood".  I can't remember if it was me or Imogen who discovered that the wood had shrunk and the nail rusted so that it was actually completely loose. 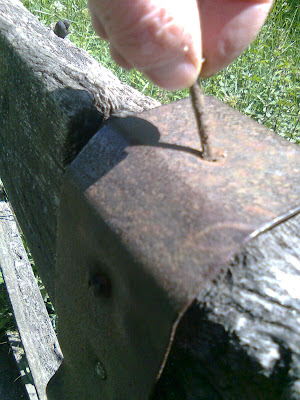 But ever since, whenever we pass, as long as no one is looking, we pull the nail out and hold it carefully while at the same time making a wish.  Then we slip it back and go quietly on our way.  Imogen has done it, Jemima has done it, Reuben has done it .. 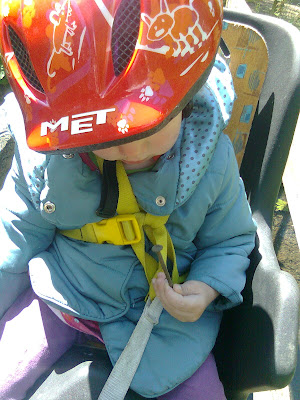 ... but for Rosie this was the first time.  I wonder what she wished for.
(As I write I hear that she is having a massive tantrum in Meadowhall - who wouldn't
- but generally she is a happy little thing). 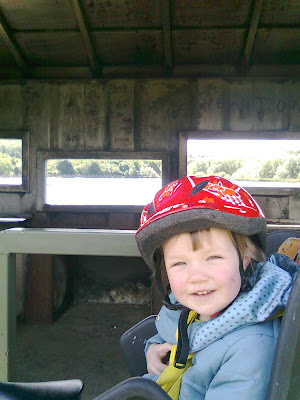 In the background is the new bird hide.  It's made of solid metal  so that though battered and scorched by a minority of the local nature lovers it doesn't actually burn down.  That was the sad fate of its cosy wooden predecessor.  Against that background, and in spite of the fact that our nail could be easily dropped and would then certainly be lost in the stream, it is reassuring to find (touch wood) that our little wishing nail is always there. 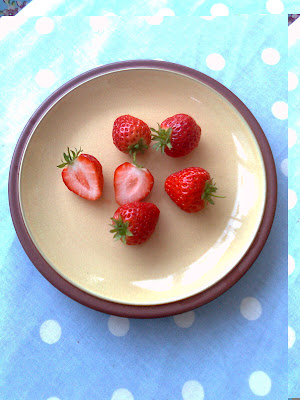 After lunch at the local open farm it was home for strawberries picked from our polytunnel. 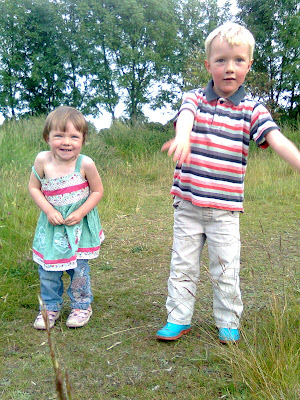 And a chance to catch up with her big brother.