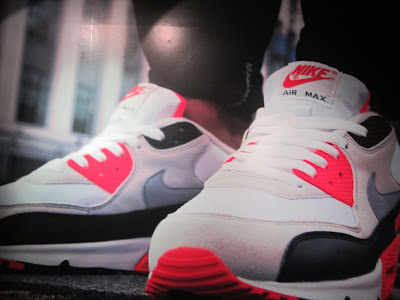 My children are big Converse fans, so we were all really excited to read that a exhibition dedicated to sports shoes was coming to Barnsley. 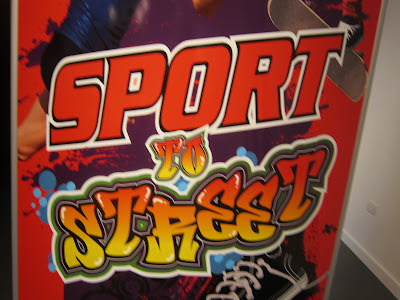 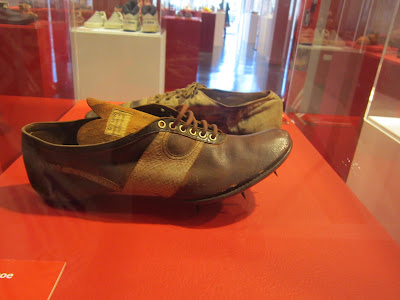 The exhibition started with trainers from the 19th Century.

During the first half of the 19th Century, American Charles Goodyear spent years studying the properties of rubber, eventually inventing a heating process called vulcanisation in 1839. This process transformed rubber into a tough and reliable material as opposed to a material that would turn sticky in hot weather and brittle in cold. In 1844, he applied for a U.S. patent and began making all sorts of rubber goods including rubber soled canvas boots. 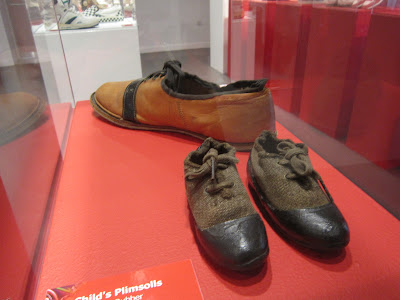 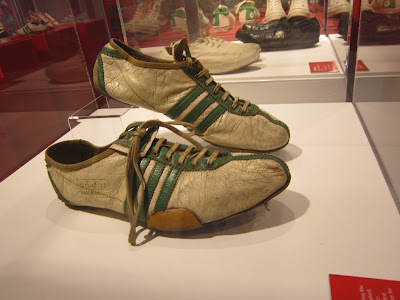 Goatskin running shoes worn by Christopher Chattaway, circa 1955.
He wore them during the four minute mile, Oxford, 6 May 1954. During the race Roger Bannister became the first athlete to break the four minute barrier. 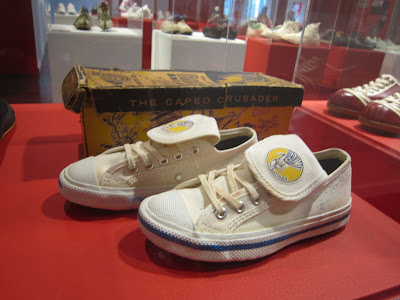 Reuben loved these Batman sneakers from the 1950's.
BNIB, as they like to say on ebay! 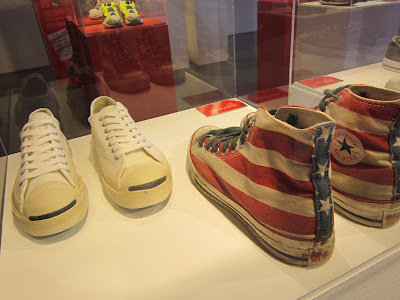 This was the first version of the Jack Purcell that was produced by Converse after they acquired the rights from Goodrich in 1972. 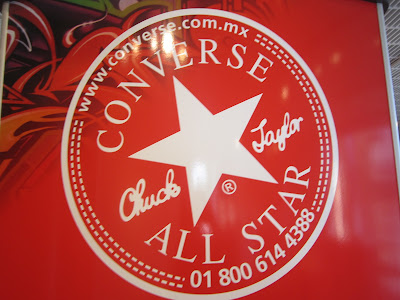 The company began as a rubber shoe manufacturer, which offered winterised rubber soled footwear for men, women, and children. It wasn't until 1912 that the company first started producing athletic shoes for tennis.

In 1917, the game of basketball was revolutionised by the introduction of the worlds first performance based shoe, the Converse All Star.

A year later, Charles H Taylor, a basketball player acquired his first pair of All Star shoes. While wearing Converse he introduced basketball as a sport to Americans across the country. Charles 'Chuck' Taylor officially joined Converse in 1921 as America's first player endorser. Chuck Taylor's signature was added two years later in the all star patch.
Converse had been popular with many celebrities over the years, but in the late 1980'spopularity started to wane. Converse filed for bankruptcy in 2001.
In 2003 Nike bought out the company.

I was a bit disappointed to find out that Nike owned Converse. It doesn't seem as quirky to be wearing Nike Converse! Imogen loves Converse.  She has been wearing them for a few years now, since before they became ultra trendy. When she first started wearing them, she had strange looks from girls of a similar age, and comments such as "Are you a tomboy? Why are you wearing them?" But she stuck with them and now it's fine for her to wear them, they are 'trendy'. 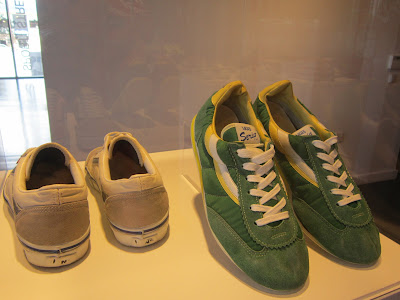 In the 1960's, Paul Van Doren set up his first shoe shop in California. The shop offered three styles of shoe and the guiding principle was to make the sneakers and sell straight to the customer.  Although a distinctive brand, Vans was open to buyer customisation. People could  specify how they wanted their shoes to look.  Back in 1966 the sneakers sold for $2.49 and $4.99.
Have you seen the price of Vans today??!! 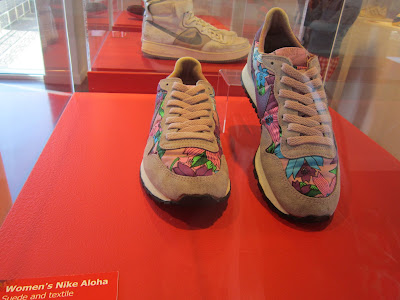 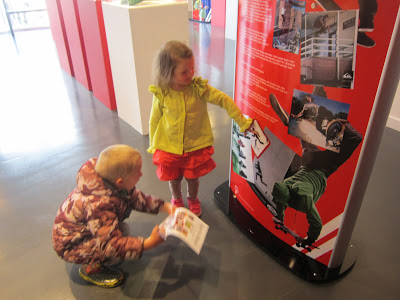 There are some great activities for children to do at the exhibition.
A picture trail  for younger children. For older children a trail with questions, a crossword and word search. I was really impressed by the activities provided. By the end of the afternoon, both Reuben and Rosanna could look at a photo of a small part of a shoe and then decide whether it was really old, modern or from a celebrity! 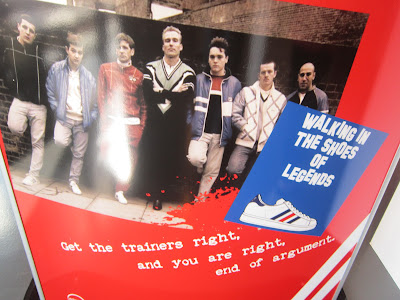 I found this part of the exhibition really interesting,
how fashions arose in football. 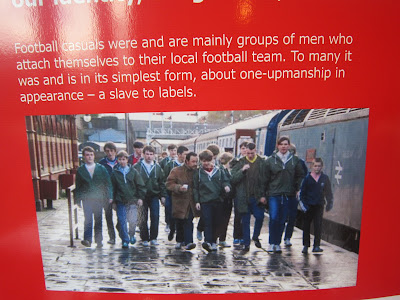 It was generally though that the scene originated in Liverpool in the late 1970's. The Liverpool team were the football kings of Europe and fans started to bring home expensive designer goods, such as Lacoste, Fila and Ellese from their travels. 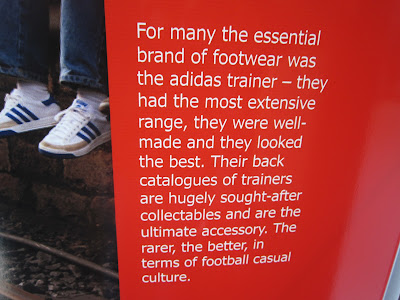 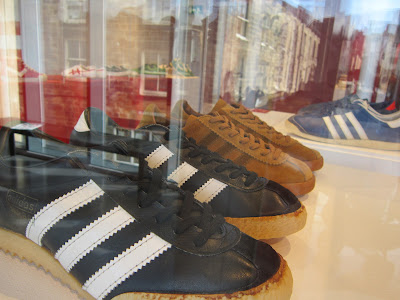 I had a pair of Adidas Samba to start Comprehensive school.

On to the designer section... 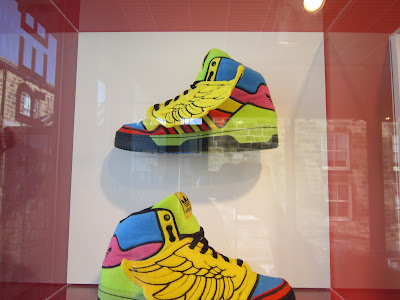 Adidas hi-tops with wings.
We actually saw someone wearing a pair of these in Meadowhall.
We got very excited!!! 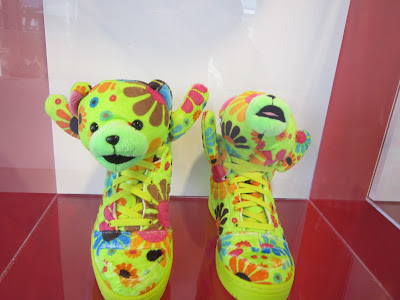 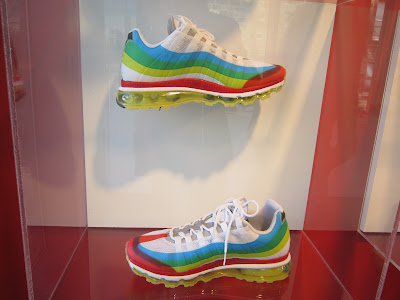 
And saving the best till last ... 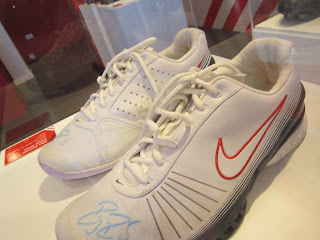 Imogen dared me to ask them to lift the plastic case, so I could sniff them!

So what did I do?