As I sit and write this post it makes me smile to hear my four children laughing in the other room. They are actaully watching two delivery men trying to get a huge sofa through a standard front door across the road. A couple of weeks ago was quite a different story. Jemima had a really nasty virus which resulted in her mouth being covered in ulcers and blisters, which then meant she couldn't eat, so she got really weak and justed wanted to sleep. A final visit to the out of hours doctors found she had an infected throat and after 24 hours of antibiotics she began to feel better. The dynamics of the family were very different with Mima out of action. I thought, with a five year gap between my two sets of two, that Immy and Mima would be friends and so would Reuben and Rosanna. But they really enjoy all being together, often doing different things, but being in the same room or on the same sofa.
So to hear Jemima singing to Jesse J and playing with the others is brilliant. 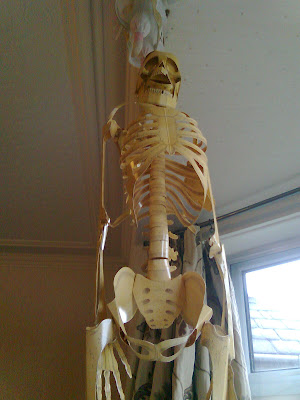 When she was starting to feel better she made this model of a skeleton, which now hangs in the window with the Christmas angel! 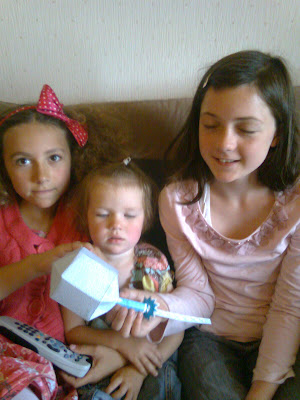 We also made a model of a virus and the kids enjoyed chasing each other around with it and then passing on ear infections, nose infections etc etc.

The children then became interested in finding out more about the body and illnesses and we found this great website, with games, movie clips and quizzes.

The movie clips are very funny and informative and I really enjoyed watching them too!