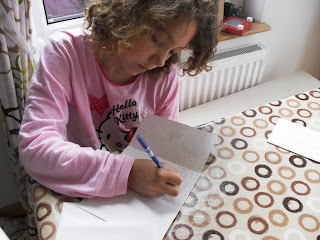 Wednesday
The day started with abit of Postcrossing -Imogen wrote a card to Somewhere and Jemima to America. We received a card from Finland this week. Imogen's first card she sent to Russia still hasn't got there.
We then took Reuben and Rosanna to toddler group we go for the last hour so that everyone is happy.
Back for lunch and then off to post the letters.
Maths Jemima did some two digit and two digit adding together. Imogen internet based multiplication.
Posted by 4kids, 2 guinea pigs, 1 happy family at 12:39